We first did this activity for the first time with the 2010 FIFA World Cup. You can read my post about it here in which I highlight not only what a great learning activity this is for the kids but how much fun it is for the whole family. This year the 9 year old was the one really driving the program – he would have coloured in at least half of the flags with the rest of the family doing the remaining flags. 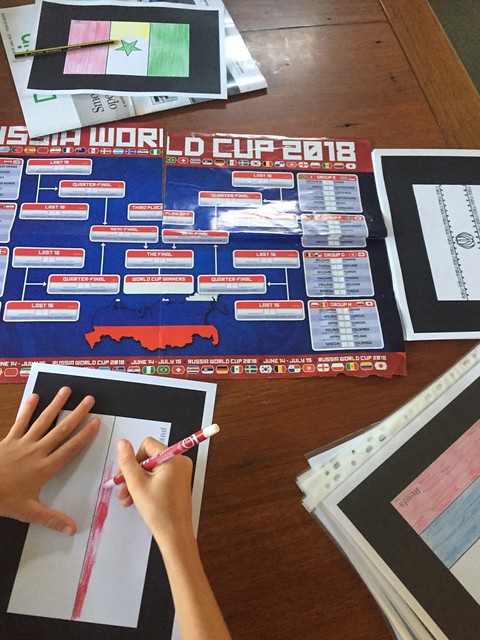 It was great to have the colouring process lead by the youngest. We had the table set up for a couple of days and people would join him as they wanted to and coloured in together. I actually find colouring in quite calming so really enjoyed it. The youngest even managed to get the his eldest sibling involved too! 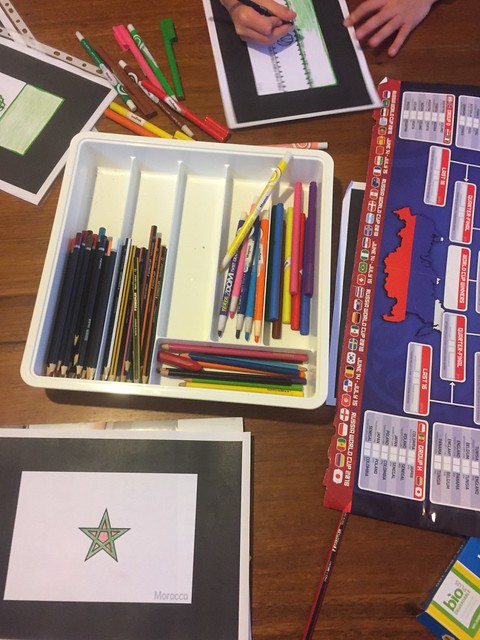 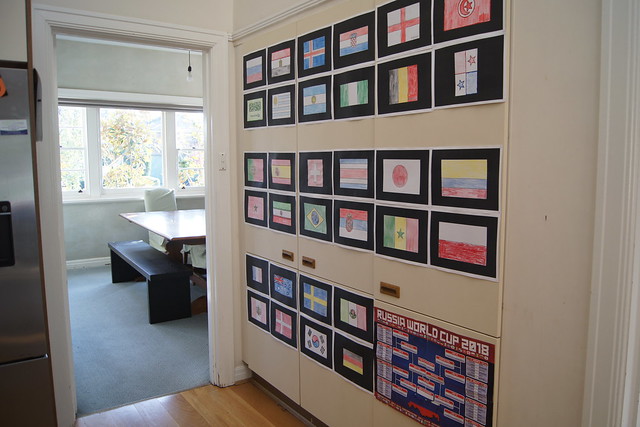 To set up the World Cup draw with the coloured in flags you need to have a basic understanding of how the World Cup works, so here is a very quick summary: 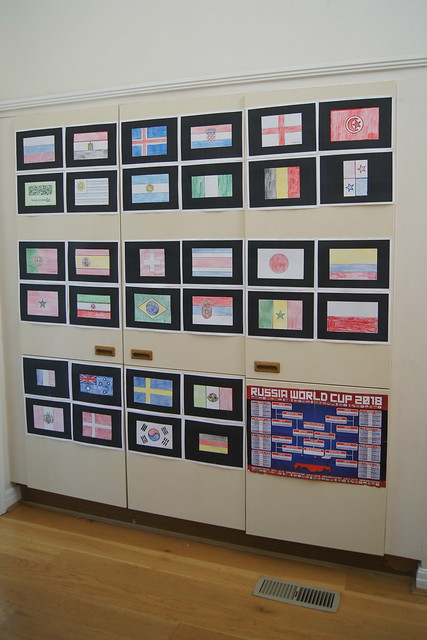 To set up this FIFA World Cup 2018 activity for the kids at home here is how it works:

Once we have set the draw up in the kitchen, we then write the names of all the teams and my husband sorts them into groups based on their likely hood to make it through to the finals. We all then are allocated a number of teams for the World Cup, receiving a mix of teams with a decent chance and those who are unlikely to make it past the group stage.

As the stages of the FIFA World Cup progresses, we take down the flags of the countries which are knocked out. So we start with 32 flags on our kitchen cupboards, then 16, then 8, then 4, then 2 and finally 1 once the FIFA World Cup Final has been played.

We have a great time doing this and it is an activity that everyone can join in and enjoy. Even if there team doesn’t make it to the final they still get to have a takeaway dinner which doesn’t happen very often in our house so is quite exciting!

The table below has all the teams in the 2018 FIFA World Cup set out in their groups. You can click on the links and go through to a picture of that country’s flag, which you can print out and colour in. For some reason Panama prints in portrait format so you will need to manually change it to landscape so it matches the same orientation as the other flags.

There are so many activities you can do with the FIFA World Cup to leverage their enthusiasm for natural learning opportunities.

This is a UK based site that has a number of World Cup and soccer activities. You do have to register to access them though. Registration is free:

ESOL Courses is a site which teaches English as a second language, but they have an extensive list of online and printable activities that would suit varying ages. Some of the activities relate to previous World Cups but some are more general like these ones:

The activities on Activity Village UK are more suited to younger kids and they usually have loads of fun free things to print out, but at the time of publishing they were in the process of updating their resources for 2018:

For Australian readers the SBS website is a useful guide for when games are going to be televised in AEST.

SBS has announced its broadcast schedule for the group stage of the 2018 FIFA World Cup Russia™, featuring six prime time starts. SBS will broadcast a total of 25 premium World Cup games LIVE, FREE and in HD, including the opening match, semi-finals, final, and all Socceroos fixtures.