Do you have a pet? If so who takes care of it. If not, why not? I’ve personally always kept the animals out of my house mainly because of the extra work it would provide for me. But now my kids are older (10,12 yr) I think it would be nice for them to care for some animals.

At the time of writing we have one dog and one gold fish. Our dog is a gorgeous Airedale terrier named Pocket Money – Pocket for short. Airedales are often called king of the terriers because for a terrier they are very big. Pocket is 3.5 years old and we have had her since she was about 8 weeks old.

We are more of a dog family. In the first year of our relationship my husband and his sister who were sharing a house at the time, bought a border collie pup which they named Milie. When my husband and I moved in together Millie became our dog and we had her for about 15 years.

When Millie died we didn’t get a new dog straight away as I felt the kids were too young and I couldn’t add any more work to my days. Puppies are gorgeous but they do require work.

Once our last child went to kinder the kids started lobbying hard for a new dog. It took some time to decide on the type of do to get, but we eventually agreed on a Whippet. Sadly for us we only had the Whippet, which we called Lucas, for six months when he escaped from the backyard and was subsequently run over.

We were all devastated by this, especially the older kids. The youngest at three didn’t quite understand the emotional impact of what had happened. When he saw people walking a dog or playing with their dog, he would say things “We can’t do that because Lucas is dead”, which would upset the other kids.

Pets do teach kids life lessons. A few months after our dog died, a friend from school of one of the older kids, grandfather died who he was very close to. Our child commented that if this had happened before Lucas died, he wouldn’t have really understood how his friend felt. He remembers how sad he was when Lucas died and he was our pet – losing a grandfather would be much worse.

It took over 12 months before we decided to get another dog and this was at the considerably lobbying of the kids. They actually put together a powerpoint presentation outlining why they wanted a dog, the type of dog they wanted and how they would help look after the dog.

So we agreed and we have a family connection to excellent breeders of Airedales and Pocket became our new addition to our family. Pocket has an excellent pedigree and the breeders who we know well, let us have our gorgeous pup and they would breed her at least once. 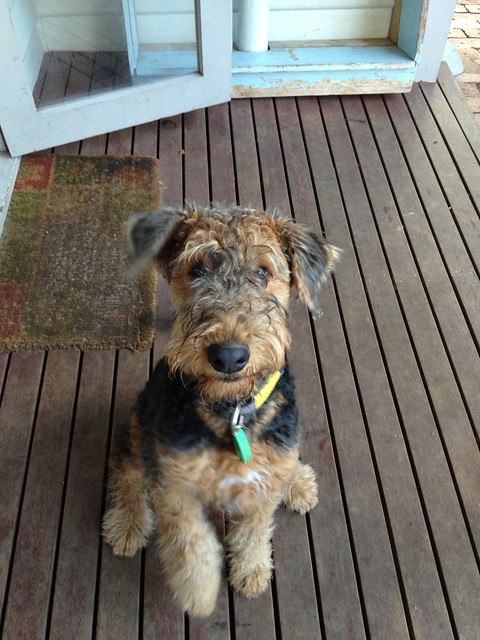 I will be completely honest and say that I vow never to get a puppy again! They are hard work and you need to be prepared to put in time to train them. The photo above is Pocket at six months, so as you can see she is a bigger dog.

Pocket ate shoes, balls, dug holes in the garden, ate the hose and even ate her kennel! Airedales also jump quite a bit, so she easily knocked over small children, not maliciously, but out of excitement. Many of the younger kids’s friends were afraid of her just because she was big, so we would have to tie her up for play dates.

Pocket was always going to be an outside dog, which did makes things easier as I think she would have eaten the furniture too!

At the start we were great at training her, but as winter came and we were outside less it did drop off, so we really do need to look at ourselves for some of her less than attractive behaviour. 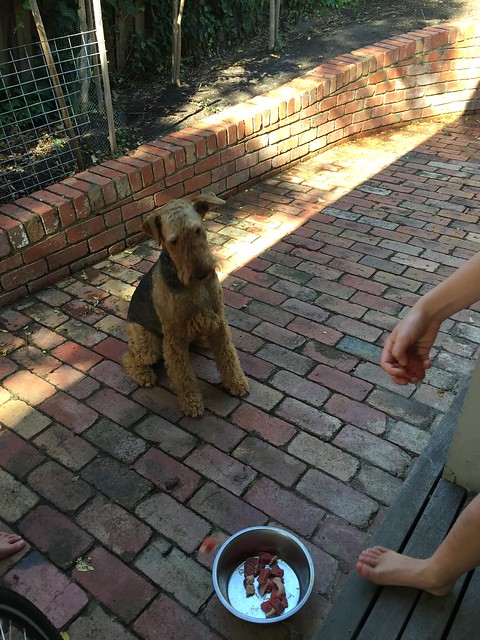 The break down of the care and maintenance of our dog Pocket is as follows: 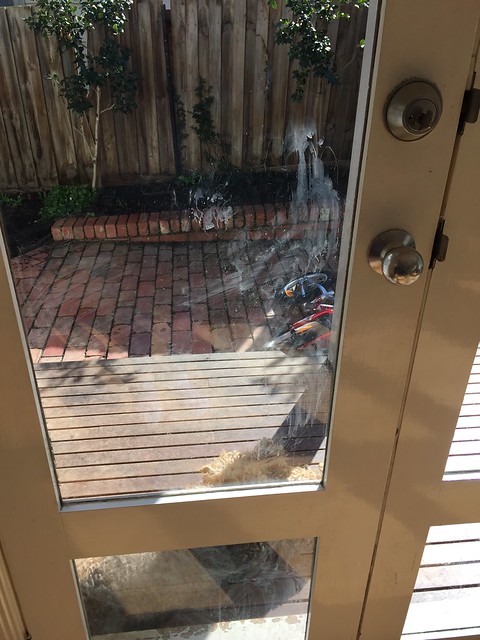 The reality of having a dog in our family is that they adore her and love her, but do often need to be reminded to give her more attention during the school week. It tends to happen pretty naturally over the weekends, but in the hustle and bustle of the school week she can get forgotten.

Out and about and away

Where we can, if we are out for long periods on the weekend at the kids’ soccer or my husbands’ football we will take Pocket with us. She loves to be out and about and if left for long hours on her own all the time, she will find something to destroy!

We are very lucky that my husband’s parent’s look after Pocket for us when we go away. A big dog like Pocket is a lot of work and she may dig people’s gardens, so we are always very grateful that they look after her for us.

The joy of a dog and life experiences

While she is work, the kids adore Pocket and she them. I too love her and she is great company for me on the run home from school and when I am doing stuff outside.

The kids do certainly learn that having a pet isn’t just about the fun parts, but they have to help look after her which is excellent life skills training for kids.

Pocket had puppies in February this year and it was a brilliant experience for the kids. We had lots of conversations about breeding, birthing and mothering. 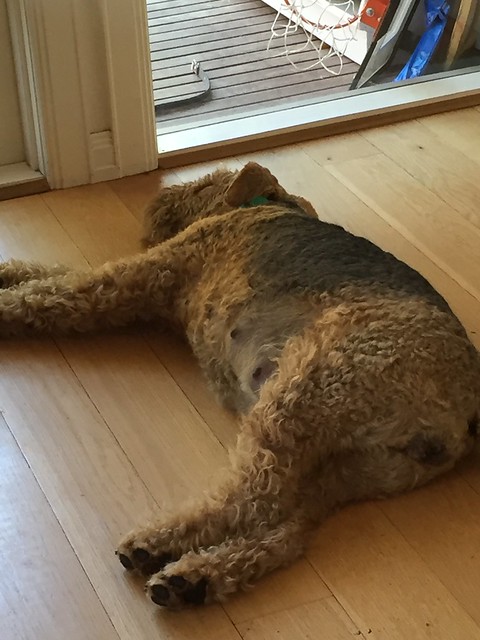 The photo above was Pocket toward the end of her pregnancy on a hot summer’s day. The kids understood that on those days we needed to keep her cool and she couldn’t run as fast and as much as she used to as she grew bigger. 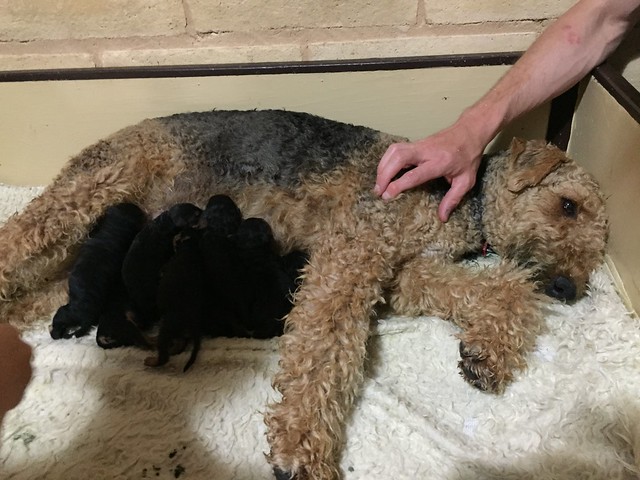 Pocket went back to the breeders to have her puppies, but we visited her many times and the kids loved seeing the puppies and watching them grow. They did plead for us to keep one, but as mentioned before, I am not sure I can do a puppy again. 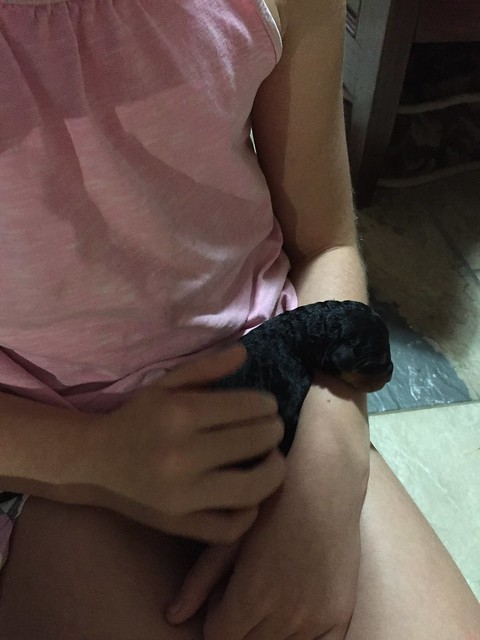 Here are some last minute thoughts on adding a dog to the family:

Are you a dog/pet owner? What advice would you give to a family thinking about adding a pet to the family?